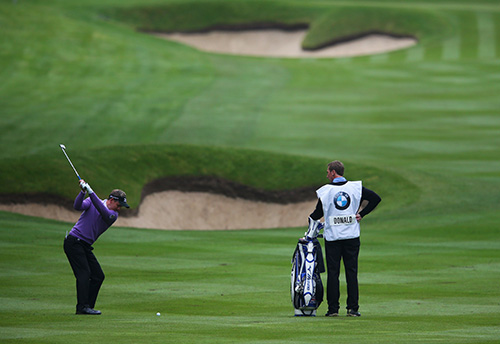 Englishman Luke Donald admits it would be a big honour to follow in the footsteps of Colin Montgomerie as he bids for a hat-trick of titles in this week’s BMW PGA Championship at Wentworth Club.

Montgomerie is the only player to have won The European Tour’s flagship event three years in a row, sealing his treble in 2000.

Donald now has the opportunity to match that feat after defeating Lee Westwood in a play-off in 2011 and successfully defending his title 12 months ago, finishing four shots clear of Ryder Cup team-mates Justin Rose and Paul Lawrie.

“I have to treat this as an opportunity to win another tournament,” he said. “I’m trying not to think about three in a row so much, but it would be great to emulate what Monty did.

“Since the changes here, the course seems to have really suited my game and I feel very comfortable around this place.

“This tournament has always been very special for me. Having grown up very close to here, I’ve always had a lot of support of family and friends to enjoy my victories with me, and it would be great to have an opportunity to win three in a row.”

Montgomerie, who captained a European team featuring Donald to Ryder Cup glory in 2010, wished him well in his pursuit of a record-equalling hat-trick.

“I know how difficult it was, but obviously these things are there to be equalled or broken,” said Montgomerie.

“It’s a great thing to try to achieve, in our flagship event, and to try to win anything three times in a row is something that he should be very proud of.”

Donald’s compatriot Rose, the World Number Four, is again expected to be among the challengers over Wentworth Club’s famous West Course, and he is relishing the opportunity to play on home soil.

“This event really is on a short list of tournaments that I would love to win,” said Rose, who played alongside Arsenal footballers Theo Walcott and Aaron Ramsey and Fulham’s John Arne Riise in the Pro-Am on Wednesday.

“Just outside of the Majors, there are very few tournaments ahead of this one. You have the nostalgia of being here as a kid, watching all the great players play, and obviously it’s always a nice, hometown feel for me coming back here with friends and family.”

World Number Two Rory McIlroy will also be among the favourites this week, with 11 of Europe’s heroes from the ‘Miracle at Medinah’ in the field.

“I think it’s an event that all of the Europeans and people on The European Tour look forward to coming back to every year,” said McIlroy. “It’s always a great atmosphere. You play in front of crowds who really get behind the tournament and are very supportive.

He added: “It’s been a slow start to the season for me, but I feel the last few weeks have been really, really good. I’m really excited and positive about where my game is at.”