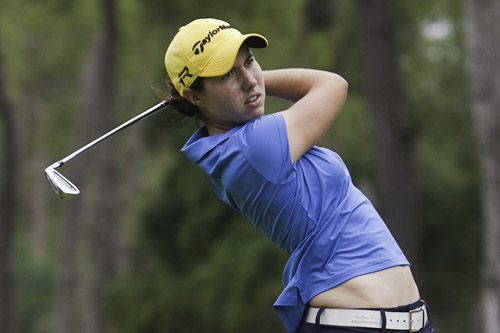 Carlota Ciganda showed the way as she shot a first-round four-under-par 69 at National Golf Club to lead the Turkish Airlines Ladies Open by a stroke.
The Spanish 22-year-old, who shot a course record 66 in last year’s tournament, mixed five birdies with one bogey on a warm and cloudy morning in Belek, Antalya.
“I’m very happy with my round. I think it’s a good start with four-under today. I played very solid today, hitting lots of fairways and greens and then I made a few putts out there so I think it’s a good result to start here,” said last year’s European No.1 Ciganda.
Showing why she is currently ranked second on The 2013 European Solheim Cup points list, Ciganda started on 10 and birdied 13 and 15 before impressively saving two pars on 16 and 18.
On the front nine, she then almost eagled the first hole before picking up back-to-back birdies on six and seven. She dropped her only shot of the day on her last hole, the par-four ninth.
“I wanted to do a bogey-free round, but I mean, it’s hard not to make mistakes in 18 holes and I hit a little bit to the left and it bounced to the bunker so I couldn’t make up and down,” she said.
Four further players, who all played in the morning, ended the day a shot behind at three-under: South African Lee-Anne Pace, Australian Sarah Kemp, Carmen Alonso of Spain and Norwegian Cecilie Lundgreen.
Lundgreen, a graduate of last season’s LET Access Series, was elated with her round after she reverted to using her old golf clubs this week.
She said: “Last season I had such a good season on the Access Series and played a few events in Sweden. My coach was so kind to get me some new clubs and I started the season with these new clubs but I wasn’t really hitting it that well. At a clinic last week I hit some shots with my old clubs and said, ‘Wow! This is like heaven!’”
“I had four birdies on the front nine, which got me off to a great start and then I was fighting a bit on the back nine to keep it. It was steady, I putted well and my focus was on hitting fairways, which you need to do out here.”
Alonso, another long hitter who recently lost her full tour card, was delighted to be back in the mix and said: “I think today was a great day. I played really well and focused on what I have to do. I didn’t think about the score. I think that was the main thing, because this golf course is really difficult.”
Pace, the 2010 LET money list winner, was taking a similarly laid back approach. She said: “I’m taking it one shot at a time and my coach James (Petts) is here this week so I’m getting things grooved. It was a strange round as I didn’t hit a lot of greens but the ones I hit got close and I made four birdies I think. The short game worked fantastic.”
The defending champion, Christel Boeljon from the Netherlands, who won back-to-back titles in 2011 and 2012, was part of a group at two-under 71.
Her round included an eagle two on the par-four 13th hole and she was one of three players to achieve the rare feat on the first morning, along with Henni Zuel, who eagled the par-four ninth and Marion Ricordeau, who eagled the par-four 18th.
Swedish rookie Rebecca Sorensen was six-under after 11 holes, but dropped five shots in three holes from the fourth and ended the day in a group on one-under along with England’s Laura Davies.
The 2010 tournament champion Melissa Reid was in a group at two-over along with fellow English player Charley Hull.